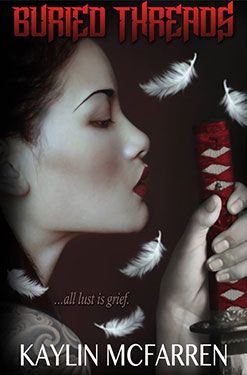 Rachel Lyons and Chase Cohen work together as the successful owners of a treasure hunting company. But a seemingly simple assignment — to track down a priceless gem that is believed to be buried in a shipwreck deep within the Sea of Japan--takes a startling, and dangerous, turn.

Faced with a monk's dark prophecy that a natural disaster will soon strike Japan, killing millions, Rachel and Chase must embark on the mission of a lifetime in order to uncover the three cursed samurai swords that can avert the catastrophe.

Chaos ensues as their adventure takes them from shark infested waters and creepy caves to haunted hidden tombs and a confrontation with Yakuza gang members. Time is running out as the prophecy's day of reckoning draws near. Will Rachel and Chase succeed before disaster strikes?

Kaylin has been asked on numerous occasions about the inspiration behind her romantic suspense novel — Buried Threads. Not only does this come from her interest in scuba diving and Asian antiques, but also from the people she's had the privilege of knowing after traveling to Japan on a regular basis.

Thirty-nine years ago, she had the honor to meet a wonderful mama-san for the first time. To this day, this compassionate woman continues to oversee the operations of her 8th generation teahouse as well as day-to-day activities for Gion geishas and maikos within her "family" in Kyoto, Japan. Under her guidance, Kaylin was able to develop personal relationships with these young women who have chosen a less popular lifestyle in order to maintain the culture and beauty of their country.

During a separate trip, Kaylin also meet a Buddhist monk who arrived as a guest at a dinner party looking very much like an average businessman. Despite the fact that he wore western clothes and black rimmed glasses, and had shaggy brown hair, this man exuded a remarkable warmth through his constant smile, slow methodical gestures, and soft gentle voice. During the course of the evening, she witnessed his ability to read the future of family members and reveal a person's past lives. He shared his amazing photographs with glowing orbs and talked about his mission to travel around the world freeing trapped, tortured souls.

Kaylin also meet an unusual gentleman after attending her father-in-law's funeral twenty years ago. While sitting in a black limousine, waiting to drive to a crematorium on the top of a mountain, he slid into the seat next to her wearing a black suit, black shirt and white tie. He had a tan, weathered face, spoke broken English and was extremely polite in every sense of the word. However, during their drive, Kaylin learned from husband that this man was not only his uncle, but also a high-ranking member of the yakuza — in other words, a prominent member of the Japanese mafia.

With all of these people in mind, Kaylin knew one day she would bring them together in one of her suspense novels, and with the creation of Buried Threads, her cast of characters was born. Although the second book in the Threads series picks up where Severed Threads left off, this story truly stands alone. Within its pages, you will find interesting facts, historical places, Japanese culture and a thrilling adventure. Like each of her books, it is designed to reach into your heart and leave an indelible impression — an encouraging message — reminding readers that they can overcome any obstacle in their lives if they just have faith in the possibility. 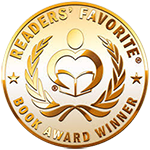 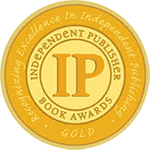 I greatly enjoyed this book and it was hard to put down. I will be reading more books by Kaylin McFarren.

Buried Threads is as mesmerizing as Disclosure, as scary as The Hand That Rocks The Cradle, and as intense as The Juror. Highly recommended!

Compassion and greed, life and death, fear and resolution, mission and accomplishment, struggle and survival, gratitude and faith are all aspects of this story that can only be summed up as spectacular.

Reluctantly, she took the proffered hand. "Rachel Lyons." She bristled at the man's touch — the strange sensation it evoked. Although she wanted to draw her hand away quickly, his other hand closed over hers and held it tight. After an endless moment, he released his grasp and leaned back in his seat, giving her the space she craved.

He pointed at her files and borrowed copies of Emperors of the Han Dynasty and The Knights of Templar. "Looks like you're got some heavy reading to do. We definitely have a lot in common."

She quirked her brows. "We do?"

"In regard to your interest in history. So what is it you do, Miss Lyons?" He flashed a wide disarming smile.

She hesitated before answering. "I find missing things too...under the sea."

"You're a treasure hunter?" he asked.

She opened her file and felt his gaze sharply, as if he had reached out and touched her skin. She sensed that he wanted to delve further into her life, but for the next two hours she studied ocean topography and reports on strange sea creature sightings, and made a point of not sparing him more than the briefest of glances. The lights on the plane were eventually dimmed and all around her window shades were being pulled down. It had been three long days since Chase left their warm bed in her father's beachside cottage for salvage preparations in Japan. His absence and the anticipation of her trip had left Rachel completely exhausted. As the air thickened and the airplane cabin stilled, her eyelids fought gravity. The gentle swaying and steady hum of the engines lulled her into a deep, dreamless sleep.

Eventually, the sound of the breakfast cart jolted her awake. Still groggy, she forced her eyes open and inhaled the enticing aroma of hot coffee, reminding her of freshly ground heaven. However, her calm was short lived. With one look to her side, she realized the file she'd been reading prior to drifting off to sleep had been tucked into the seat pocket ahead of her.

You've got to be kidding me. Rachel studied Shinzo while he sheepishly sipped his coffee. His concerted effort to avoid eye contact left her wondering if he'd taken advantage of her carelessness by snooping through her confidential papers. Everything she'd been sworn to keep secret might have been exposed to this invasive stranger, endangering not only Trident Venture's project but also the individual who had risked his life to hire them.

She hesitated before asking, "Did you by chance move my file?"

"Your papers fell," he answered. "By the looks of them, you might want to keep those close to you, Miss Lyons."

His inference was unnerving. Although tempted to ask if he'd found anything of interest, she simply mumbled, "Thank you."

With that, Shinzo turned his view to the window.

Mindful of the cart's proximity, Rachel stood abruptly and pulled down her carry-on. She emptied the seat next to her, zipped her bag shut and returned it to the overhead bin. Then she resumed her seat and stared straight ahead with her hands clenched in her lap. Buried anxieties were surfacing by the second, curbing her appetite. She shook her head, declining breakfast when it arrived on the hands of the blond stewardess.

"That looks delicious," Shinzo said, lowering his tabletop. Rachel watched as a tray containing a cheese omelet, blueberry yogurt cup, croissant and strawberry jam was set down before him. The stewardess returned a second time with coffee, cream and sugar.

Wonderful. Rachel picked up the in-flight magazine and flipped blindly through its pages. She rocked her heel nervously, anxious for this tortuous ride to be over. Her cheeks warmed at the practically pornographic noise that came out of her seatmate, as he threw his head back and munched gratifyingly, his eyes closed in contentment. She noticed a spot of jam on the corner of his mouth and looked away determinedly.

"There's nothing better than warm bread and eggs in the morning," he said, recovering from his omelet orgasm.

Rachel glared at the annoying man, willing him be sucked out the window. But then she'd never know his whole story. "You're not a private investigator, are you, Mr. Shinzo?" she grilled.

He picked up his torn roll and smeared it with more jam. "I never said I was."

"But you inferred as much."

"That was never my intent. If you recall, I never told you what I actually recover."

She shook her head and sarcastically laughed. "Oh my, God...you're a treasure hunter, aren't you? I've been sitting next to my competition this whole time."

Shinzo chuckled. "Not quite."

"So, what do you collect then?"

"I think you'd have a hard time believing me if I told you."

"Try me," she said then inwardly cringed on her insistence.

After another well-chewed mouthful, he looked directly at her and replied in a matter-of-fact tone. "Souls."