Requiem For A Queen 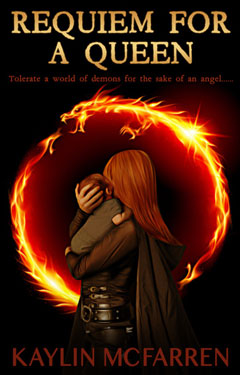 Forced into captivity by Lucifer and crowned as his queen, Samara Daemonium struggles daily with her identity and daunting duties in Hell. She belongs to a race of Nephalem—hybrid beings who are half angel and half demon—and although she wields the powers of both supernatural species, she has yet to discover her formidable prowess and potential.

While protecting the Outer Rim of Hell, Lucinda continues to plot her father's demise and her ascension to the throne. Believing Lucifer plans to bypass her as Hell's next ruler, she kidnaps his new heir and has every intention of killing him.

Meanwhile, Samara is faced with the threat of death for her part in an invasion. Her survival depends on revealing a dark secret, giving her no choice but to depend on Lucifer and his Tracker Demons.

Ultimately, Samara's journey to self-discovery instills in her the importance of family and friends, and reminds her that belief in the impossible is the assurance of things hoped for and the conviction of things not seen.

Requiem For A Queen

See the giveaway details at Goodreads.

According to Perry Bysshe Shelley, "Power, like a disease, pollutes whatever it touches." In other words, many characters in literature become corrupted because of their quest for power. I fully agree with Shelley that power "pollutes everything that it touches" because having too much power concentrated in the hands of one person leads to a dictatorship and has bad consequences. "Power is the root of all evil" is another interpretation of Shelley's statement. This idea is demonstrated in the plays Hamlet and Macbeth, both by William Shakespeare, where major characters lead themselves to their downfall by trying to become the most powerful person in the room. In fact, in both plays many major characters die because of one person's ambition to become a powerful king.

In Hamlet, Claudius murders his brother, marries his former sister-in-law and ascends to the throne of Denmark. These three deeds are performed by a shrewd and self-serving man. The King will do almost anything to protect the throne, in spite of knowing that he did not rightfully earn it. He resorts to underhanded tactics such as spying, manipulation, and deceit in order to overcome whatever he perceives as a threat to his supreme position.

But what if a power-hungry Queen was the culprit in this play? Would she be viewed simply as a figure head and remain neutral with respect to political matters? Or would she be the ultimate bitch? By convention, the Queen does not vote or stand for election. She is purely a figure head in more ways than one, and maintaining relevant relationships is her singular focus and primary responsibility. But what if the Queen controlled the military? What if she craved an all-encompassing position in government, like her father before her? What if she could be the ultimate ruler of Hell? Ambition drives this story like many others. But what makes this story unique is the length the Queen will go to in order to steal the throne she craves. Doesn't this make a far more interesting scenario? A tale about the extreme measure a woman would go to in order to obtain the power she believes she deserves?

Now, that's the kind of book I would read and definitely write.

McFarren did an amazing job creating this series. The characters and conflicts immediately draw the reader in. I love that while some of the flawed characters have redeeming qualities, others are completely wicked. The settings are described in vivid detail. Being that much of it takes place in hell, there is some extremely unsettling imagery, but that adds to the fun!

I thoroughly enjoyed this intriguing story from start to finish. If you love dark paranormal stories and supernatural fantasy, be sure to read all three books in the Gehenna series: Soul Seeker, Annihilation and Requiem For A Queen.

The beauty might not hit you until after you've finished the whole thing. Readers who enjoy occult and fantasy will LOVE Requiem for a Queen.

Overall, the book has an intriguing plot, well-developed characters, thought-provoking themes and an element of suspense. Readers who enjoy occult and fantasy will definitely love this book.

Samara stared down at the sprite, disbelieving her ears. "Where did you hear that? Who told you such a thing?"

"I heard a coven of witches talking in the forest, offering to help the Queen."

Samara looked at Onoskelis. "There's nowhere safe anymore. Not for me or my son."

The sprite began flittering about in the air, obviously excited by her discovery. "You're the one! You're the one! I have to tell the others! You're the reason why they're all hiding! Why everyone is so afraid!"

Samara reached out and grabbed the sprite around the waist, restricting her movements. "If you say anything to anyone, I'll squash you like a bug. Am I making myself clear? Like a bug!"

Papillon quirked his brow. "Why did you say that Mama? Why would you squash her?"

"If she doesn't keep our secret and stay in my pocket, there's a good chance we'll be found. And the last thing we want is for one of those monsters to get hold of us. Am I making myself clear?"

Papillon nodded his head solemnly and stared at Eva, still captured in his mother's hand. "You have to be good, or I'll be burying you beside the little mouse I found in the snow a few days ago."

Eva swallowed hard. "Did you kill it?"

Papillon looked up at his mother and smiled sweetly, rather than answer her question. "I'm getting hungry, Mama. Are we eating soon?"

Samara released her hold on the sprite. "Eva, I want you to stay in my pocket until I tell you to come out. Understand?"

Eva blinked her big green eyes and slowly nodded. After climbing inside, she rested her chin on the top of Samara's fur pocket and held on with both hands. Right then and there, she made up her mind to keep her magic a secret. Without even knowing it, Samara had captured a powerful wishing sprite capable of providing wealth, love, success, and protection–whatever she truly desired.

"Five wishes are better than a silly amulet created by a Shapeshifter," Eva whispered. "If they only knew what I can do. They could be living in a castle rather than hiding in the woods."

Then suddenly it happened. Like a lion's roar, a bellowing groan echoed all around them. A second unseen creature answered back and then a third. Samara looked down at Onoskelis. After seeing the fear in her eyes, she realized if they didn't move quickly, they were going to be killed and eaten by horrifying predators.