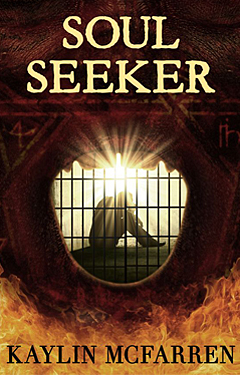 ...a new urban paranormal, romance adventure taking you to the world of celestial politics, supernatural demons, guardian angels, soul collectors and other dark, maligning creatures referred to as humans.

Crighton Daemonium arrives in the peaceful town of Lochton, Illinois, searching for wicked souls to add to his count. Benjamin Poe, a devoted husband, father and firefighter, finds himself in a battle of wills against this evil, manipulating demon, while protect his only son. Ultimately, Poe is tricked into committing murder and Crighton is rewarded with the soul he was sent to retrieve.

Following Poe's execution, Crighton continues his dark malevolent duties, until he's kidnapped by members of The Sovereign Sector. This group of scientists, notorious for experimenting on supernatural creatures, forces Crighton into a soulmate relationship with the very angel he was sent to capture for the king of Hell, Lucifer.

With secrets revealed, darkness rules and loyalties shift. The demonic soul-seeker soon becomes the target of Lucifer's revenge, and his journey to redemption and freedom–or eternal enslavement–begins.

We would all like to believe that a heavenly being is ever present in our lives — watching over us, whispering messages of hope, protecting us from threatening situations, and guiding us through the inevitable stupidity we inflict upon ourselves. When it comes to subjects regarding these feathery benefactors, there are a remarkable amount of books written regarding near-death experiences and visitations, often in the most unlikely places. There are also a great many books that concentrate on the battle of good and evil and, occasionally, a fallen angel or two that we tend to sympathize with, even though we're not supposed to.

Years ago, as an avid reader, I thoroughly enjoyed picking up a racy novel from time to time, especially when the story dealt with forbidden love. I found myself, as readers often do, beseeching the bad guy to see the light and end his evil ways. Or the handsome, musclebound rogue to curtail his philandering, after meeting the love of his life. Every action-packed romance story is an escape from reality — a way to live precariously through characters in an imaginary world where the victorious hero walks away with the prize of his or her victory.

Every book I write includes a large serving of suspense and adventure, and there's always a romantic encounter to top it off, simply because I enjoy the uplifting feelings these invoke. However, this book, in many ways, is very different from anything I've written before. While bringing together these page-turning genres, I also incorporated a touch of fantasy, by creating a surreal, theoretical world in which relationships between angels and demons exist. This is done purely for the enjoyment of my readers and not a declaration of my religious beliefs. So please enjoy this story with an open mind and overlook any errors in my imagination.

The twists and turns in Soul Seeker are unique, and guaranteed to keep readers on their toes!

An entertaining and exciting read, author Kaylin McFarren's Soul Seeker is a great supernatural thriller/paranormal romance read. A truly one-of-a-kind cast of characters and brilliant twists on mythology and lore make this novel a stand-out for fans of the genre.

A thrilling progression that culminates in the unveiling of secrets that have stood the test of time and an iconic clash between forbidden love and an enraged Lucifer.

A pulse-pounding paranormal thriller with a timeless feel and a huge heart.

A haunting tale that is very thought-provoking with many remarkable and innovative concepts.

Soul Seeker by Kaylin McFarren is a riveting, supernatural thriller reminiscent of a Stephen King novel.

"Are you aware of our situation?"

"Of course, I'm aware," Poe snapped. "The date is approaching fast and we're running out of options."

Beaudoin sighed. "It would seem so. But I haven't given up hope just yet. We can still try for an insanity plea, although I know how you feel about that." He paused a moment to study Poe's tired eyes. "I've seen it work even this late in sentencing. If there's one chance to keep you alive, Ben, then we need to–"

"Counselor, it's over. You and I both know that. I'm done fighting. If I plead insanity, they'll send me away to the State hospital...and I don't want to spend what time I have left in that place. But I don't want to go home either. There's nothing left for me there." He leaned forward, resting his elbow the counter. "I know I'm not crazy, and I understand the seriousness of it. But I swear to you it was never my intention to kill him." He paused. "Not Gabriel. Not my son."

"Any ordinary case would have resolved itself by now, but as you're very well aware, this is far from ordinary. Your son's blood was found on your clothes. The same caliber revolver found in your possession matched his wounds, and you never denied firing it. Yet you continue to claim your innocence. Which begs the question..." Beaudoin paused briefly, choosing his words carefully. "If you didn't kill your son, as you'd like me to believe, then who did?"

Poe tipped his head to the side. "I never claimed he was killed by someone else, Mr. Beaudoin. If you read the transcripts, my story has never changed. Not one iota." The crease between Poe's eyebrows deepened. "I was the one who pulled the trigger. I was the one who fired all six shots. My son Gabriel died by my hand, but like I said, it was never my intention to kill him. The six rounds I fired were meant for someone else."

Beaudoin slapped his hand on the counter. "Right! That's what you said before. Someone else was there. But who, Mr. Poe?" He paused, exasperated. "And why? Because you refuse to admit your guilt. You refuse to take responsibility for your actions. Yet here I am...trying my best to keep you alive."

Poe sighed. "I've accepted my fate, Mr. Beaudoin. I don't expect any favors, but after everything you've done for me, you deserve to hear it all. The whole truth. I've never shared this with anyone because no one would ever believe me. But there's no point now in keeping it a secret any longer. I just want to leave this world knowing I held nothing back."

Beaudoin shook his head. "And you wait until now to share this?"

"I know, but I swear the story I'm about to tell you is the God's honest truth."

Beaudoin could see his own reflection in the Plexiglas barrier and it looked as shocked as he felt. He shrugged and said, "Very well then, you've got my full attention, Mr. Poe."

"You'll think I'm crazy. That much is certain. You might even demand that I plead insanity after you hear my explanation. But all I ask from you is to hear me out. Nothing more. Then you decide if the devil was there...or if he's sitting in this room right now."

Beaudoin eyed Poe, trying to decide if this bit of storytelling was worth his time. He tugged on his shirt sleeve and glanced down at his watch. It was 10:58AM and he had more than forty minutes to spare before his next meeting. So what did he have to lose, aside from his patience? Blowing out an exaggerated breath, he answered, "Okay, I'm listening."

Poe shifted on his seat and appeared to be collecting his thoughts. Or maybe he was formulating his story. Then he began.:

"It happened two weeks before Christmas. The fire at College Inn. Do you remember that?"

Beaudoin nodded and waited for him to continue.

"It was the night that everything was destroyed, including my life. You see, Mr. Beaudoin, up until then, I was a good Christian man, a loving father. I made an honest living. I provided a comfortable life for my family. I did everything by the book...everything that was expected of me." Poe rubbed his eyes and before he pulled his hands away, he continued, "I didn't know until that night that the world is full of monsters. Monsters with dark souls and claws, waiting for the chance to tear you apart."